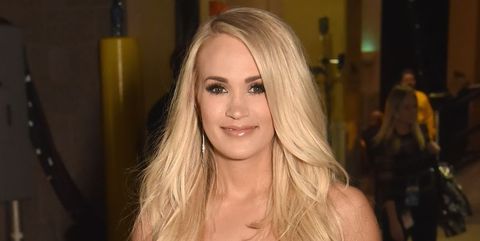 Carrie Underwood has officially announced the release of her new album, but it turns out that fans will still have a little while to late yet.

The star confirmed this week that she'll be following up her 2015 release Storyteller with a brand new album this year, revealing that she'll be dropping Cry Pretty on September 14. That's 146 days from today (April 21), but hey, who's counting?

Carrie told fans the exciting news on Instagram just days after dropping the lead single of the same name last week, sharing the artwork as well as a teaser documentary showing her in the studio.

Speaking of the new album, Carrie said: "At this point in my career, I feel stronger and more creative than ever. I think you can hear that in this new album.

"It's emotional, it's soulful, it's real, and we also have some fun on there too. I hope everyone loves it as much as I have loved making it."

In a recent blog post for fans, Carrie confirmed that she had a hand in producing her upcoming album, as well as singing and writing.

"I've always been lucky to have a voice in the writing and recording process, but this is the first time I am this involved in the production of my music," she said.

"It's been challenging and incredibly rewarding to be involved in every aspect from start to finish. David [Garcia, producer] has been an amazing teacher and partner, and I'm so proud of what we have created.

"I've been in the studio writing and singing a TON, but I've also been able to be creative in a way that I've never been before, which has been very fulfilling and empowering. "

The new album will mark Carrie's first since she had a pretty bad fall outside on some steps last year that left her with a broken right wrist and between 40 and 50 stitches in her face.

Carrie recently spoke out about her fall for the very first time, admitting during a radio interview that she fell while taking her dogs for a walk.

"I was taking the dogs out and I just, I tripped," she told radio host Bobby Bones per OneCountry.com. "There was one step and I didn't let go of the leashes. Priorities!"

She continued: "So, that's why my left hand is fine. I went to catch myself and just missed a step. If I would've fallen anywhere else I would've looked just fine."

This content is created and maintained by a third party, and imported onto this page to help users provide their email addresses. You may be able to find more information about this and similar content at piano.io
Advertisement - Continue Reading Below
More From Music
Blackpink to collaborate with Selena Gomez
Lewis Capaldi and Dave lead 2020 Brits nominations
Advertisement - Continue Reading Below
Blackpink beats BTS to break huge YouTube record
This year's Christmas Number 1 has been revealed
The Vaccines to headline LDN Block Party 2018
Justin Timberlake has written his first book
Bruno Mars flees stage in Glasgow when fire breaks out
Wireless 2018 reveals all-female stage after backlash
Coldplay's greatest hits ranked: 10 best singles
My Mental Health: 17 popstars get serious