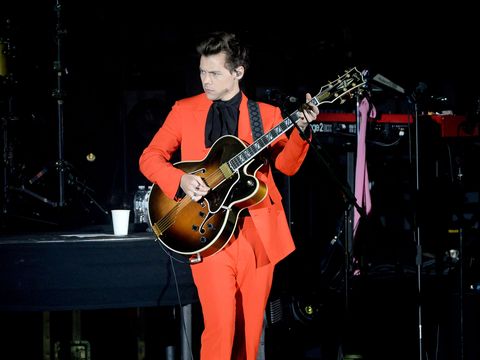 Harry Styles has given everyone a sneak peak at his new music video for 'Kiwi', and it's very colourful.

The former One Direction singer posted a picture on Twitter featuring himself and a load of kids decked out in Gucci.

It looks like a primary school class picture with Harry as the class teacher – something that many kids would quite like, we suspect. Aww.

Related Story
Harry Styles hints he could return to acting

Elsewhere, poor Harry has been having a bit of an issue with kiwis lately.

He's probably regretting naming his new track after the fruit, as it seems fans have resorted to lobbing them on stage, which really is dangerous and caused him to slip at a recent gig.

"You may have seen me fall earlier during this song. It appeared to be a kiwi. That was the culprit, some green seedy mush. Look there's another – this could end up being a problem," he reportedly told the crowd.

Not only that, but the incident has meant a local Asda store has enforced a ban on under-25s buying the fruit, so as "to protect a fellow Mancunian". Yes, really.

Honestly, whatever happened to simply throwing teddies on stage?

'Kiwi' will be released on November 8.

This content is created and maintained by a third party, and imported onto this page to help users provide their email addresses. You may be able to find more information about this and similar content at piano.io
Advertisement - Continue Reading Below
More From Music Videos
Craig David's Heartline music video is sweet love story
Tove Lo's 'Disco Tits' is 2017's wildest music video
Advertisement - Continue Reading Below
Fergie enlists Kendall Jenner for her new music video
Niall Horan is so lonely in moody new music video
Liam Payne launches 'Get Low' fan video with Zedd
Lana Del Rey's new video might be the weirdest of 2017
Fifth Harmony dropped a surprise video for 'Deliver'
Zayn's collaborative single with Sia is finally here
Ora & Sheeran debut alternate version of 'Your Song'
Taylor Swift debuts her sassiest music video yet