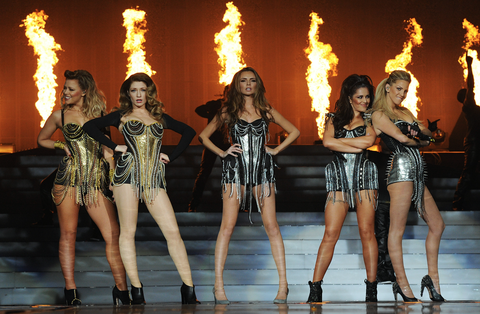 The Sound from the Underground you're hearing about a potential Girls Aloud reunion is growing louder and louder.

Given that the 'Call the Shots' girl band's split was so messy in 2013, it's been surprising recently that Sarah Harding and Nadine Coyle have both publicly tipped reformation as being possible at some point.

Even Cheryl — who has gone on to solo superstardom and more recently been taking time off following the birth of son Bear — said this month that she'd "never say never" to getting Girls Aloud back together.

"We had an amazing time when we were together," Cheryl beamed earlier in October. "I watched a tour thing the other day online and it brought back lots of memories. I was feeling really nostalgic."

Now, it's Nicola Roberts weighing in on regrouping Girls Aloud during an interview with OK! Magazine — and she too sounds optimistic.

"Girls Aloud is literally the imprint of who we are," she told the magazine. "We went from school to the band."

The singer went on to say: "I would never shy away from a band opportunity. I love the band, I love the girls but right now there isn't any talk. We're all doing our own thing."

Girls, get talking! Read the full story in this week's OK! Magazine - out today (Tuesday, October 31).

Throughout their 11 years together (on and off), Girls Aloud racked up four UK number-one singles and six platinum-selling albums. Watch Girls Aloud perform their hit 'Something Kinda Ooooh' below:

This content is created and maintained by a third party, and imported onto this page to help users provide their email addresses. You may be able to find more information about this and similar content at piano.io
Advertisement - Continue Reading Below
More From Music
Blackpink to collaborate with Selena Gomez
Lewis Capaldi and Dave lead 2020 Brits nominations
Advertisement - Continue Reading Below
Blackpink beats BTS to break huge YouTube record
This year's Christmas Number 1 has been revealed
The Vaccines to headline LDN Block Party 2018
Justin Timberlake has written his first book
Bruno Mars flees stage in Glasgow when fire breaks out
Wireless 2018 reveals all-female stage after backlash
Coldplay's greatest hits ranked: 10 best singles
My Mental Health: 17 popstars get serious